In this brief article, we talk about Mukesh Ambani and Nita Ambani’s only daughter Isha Ambani and her details like her age, her house, her education, and her husband and her net worth. Isha Ambani is a Businesswoman like her father and has been associated with many Reliance Ventures.

Just like her father Mukesh Ambani, Isha Ambani is also very focused on her family business and has joined her father and brothers in the business at a very young age. She serves as a Director in the Jio Platforms along with her brother Akash Ambani and Anant Ambani. Her contribution to the Jio Family is the most and she is also considered as the most knowledgeable among her siblings. Isha Ambani is a major decision-maker on the Boards of the Jio Platforms and has done exceptionally well. At a very young age of 29 years, she is considered a very successful businesswoman just like her mother Nita Ambani. The net worth of Isha Ambani is around $100 Million USD which is approximately ₹800 Crores. 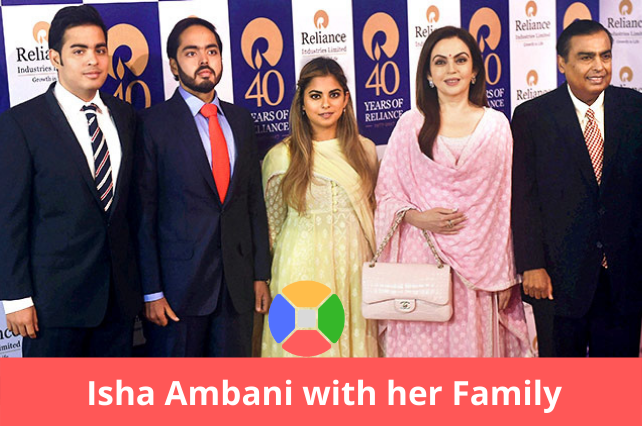 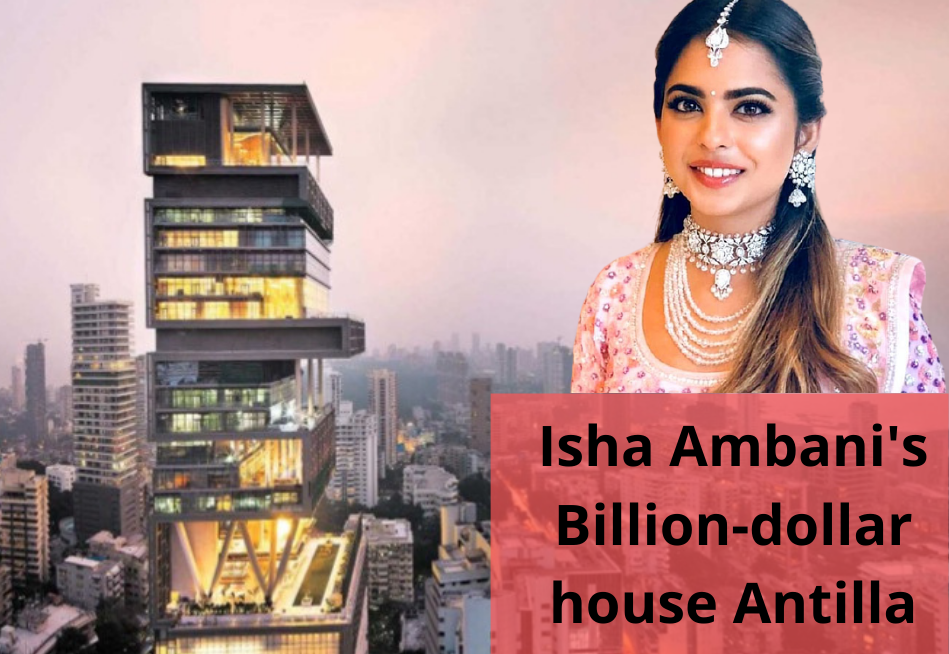 Being from a family which is one of the wealthiest in the world, Isha Ambani has lived her life with the amenities one can only imagine. Isha Ambani grew up surrounded by the best luxurious assets only a billionaire can afford. One such luxurious asset is her house Antilla where Isha Ambani lived before her marriage with Anand Piramal. Antilla is a 27 story private residential building located in Altamount Road in Mumbai.

The house Antilla where Isha Ambani lives is said to be the most expensive house ever built with a construction cost of $1 Billion USD. Antilla is famous for the amenities the house has which a middle-class person can only dream of. The house has two swimming pools out of which one swimming pool has heated water, a steam room, a state-of-art gym, a movie theatre, a snow room, a helipad, and a private office. The first 16 floors of Antilla have dedicated parking spaces for all the cars that the Ambani family drives. 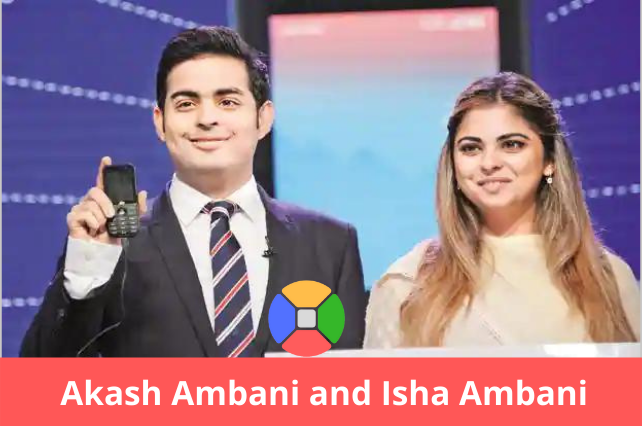 After completing her MBA from Stanford Graduate School of Business in 2018, Isha Ambani returned to India to join her father in the family business. Isha Ambani was interested in their family business from a young age and kept on learning the basics of their business from her father. Isha started out her journey even before she completed her graduation. Isha Ambani joined as the Director in the Reliance Industries and Jio Platforms back in 2014 when her age was just 23 years old.

After joining the business at the young age of 23 years, Isha Ambani came a long way to become one of the most important board members in the Reliance Foundations. She proved her capability over the years and cemented her place as a member of the Board of Authority in the Reliance Jio. The deal with social media giant Facebook where Facebook acquired a 9.99% stake in the Reliance Jio was all because of her efforts to make the deal happen. She and her twin brother Akash Ambani went to Facebook Headquarters many times to meet and finalize the deal with Mark Zuckerberg, the Founder of Facebook. Isha Ambani and Akash Ambani also had many meeting with Sundar Pichai, the CEO of Google. The growth of Reliance Jio over the years is the result of the efforts of Isha Ambani and Akash Ambani that they went ahead to crack the deal with giants like Facebook and Google to create an e-commerce platform that would compete with giants like Amazon and Walmart’s Flipkart.

Isha Ambani is also the reason behind Reliance Jio’s acquisition of the Retail and Warehousing Business of Future Group. Isha Ambani overlooks the marketing and branding section for the Reliance Jio and Reliance Retails. Reliance’s fashion portal Ajio and the e-commerce platform of Reliance named Jio Mart are all because of Isha Ambani. In fact, it is speculated that the creation of Reliance Jio is all because of Isha Ambani’s complaint about slow wifi speed in her home. Along with Akash Ambani and Anant Ambani, Isha Ambani is also one of the heiresses of the massive business empire of her father Mr. Mukesh Ambani. 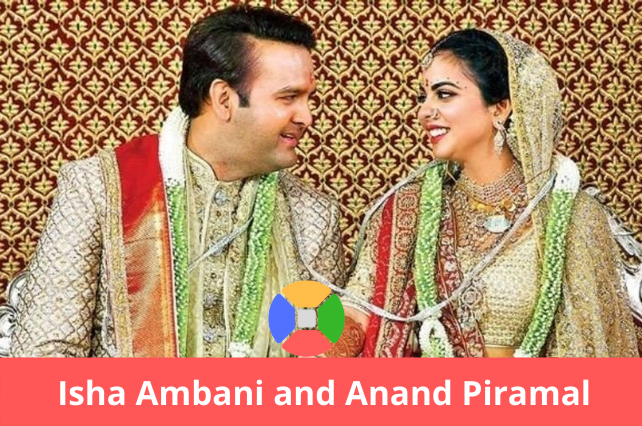 Isha Ambani and Anand Piramal got married to each other on 12 December 2018. Their wedding was a grand and lavish one and Isha’s father Mukesh Ambani did everything to make her daughter’s most important day a memorable one. Their wedding took place in Antilla and the guest list was full of VIPs, politicians, royals, Bollywood actors, and sports personalities. It can also be said that Isha Ambani and Anand Piramal’s wedding is the most expensive wedding ever to happen in India with a total expense of $100 Million USD with is equivalent to ₹700 Crores. 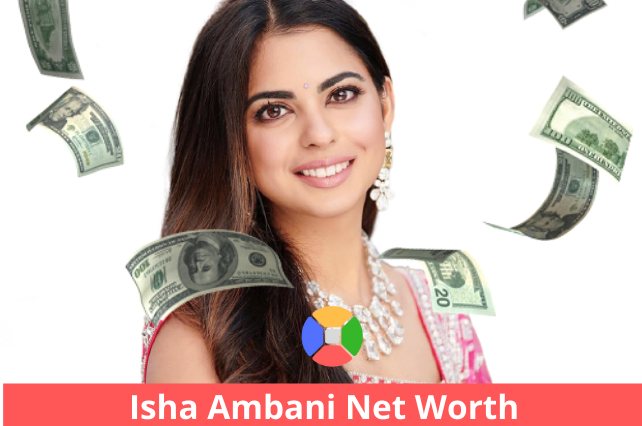 Being the daughter of the richest person in Asia and the heiress of the biggest business empire it can easily be said that Isha Ambani has a staggering amount of personal wealth. The net worth of Isha Ambani is somewhere between $100 Million to $120 Million USD. Such massive net worth is all because of the efforts and hard work she did over the years with Reliance Jio and made it such a big company. Isha Ambani is considered one of the most successful businesswomen in the country along with her mother Nita Ambani. She was highly inspired by her mother Nita Ambani and decided to join the family business.

Biographico is your destination to know about your favorite movie star, athlete, and business personality. Here you have the access to all the biographies of your favorite people.
Contact us: site.biographico@gmail.com

© Created by Biographico with Love ❤️
We use cookies on our website to give you the most relevant experience by remembering your preferences and repeat visits. By clicking “Accept All”, you consent to the use of ALL the cookies. However, you may visit "Cookie Settings" to provide a controlled consent.
Cookie SettingsAccept All
Manage consent

This website uses cookies to improve your experience while you navigate through the website. Out of these, the cookies that are categorized as necessary are stored on your browser as they are essential for the working of basic functionalities of the website. We also use third-party cookies that help us analyze and understand how you use this website. These cookies will be stored in your browser only with your consent. You also have the option to opt-out of these cookies. But opting out of some of these cookies may affect your browsing experience.
Necessary Always Enabled
Necessary cookies are absolutely essential for the website to function properly. These cookies ensure basic functionalities and security features of the website, anonymously.
Functional
Functional cookies help to perform certain functionalities like sharing the content of the website on social media platforms, collect feedbacks, and other third-party features.
Performance
Performance cookies are used to understand and analyze the key performance indexes of the website which helps in delivering a better user experience for the visitors.
Analytics
Analytical cookies are used to understand how visitors interact with the website. These cookies help provide information on metrics the number of visitors, bounce rate, traffic source, etc.
Advertisement
Advertisement cookies are used to provide visitors with relevant ads and marketing campaigns. These cookies track visitors across websites and collect information to provide customized ads.
Others
Other uncategorized cookies are those that are being analyzed and have not been classified into a category as yet.
SAVE & ACCEPT
MORE STORIES